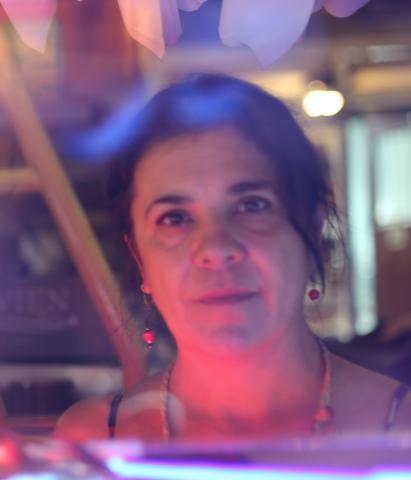 Mariela Yeregui is a visual artist, educator, and scholar. Her work includes installations, net.art, interventions in public spaces, video-sculptures, and robotics that have been exhibited in numerous museums and art festivals across Latin America, the United States, and Europe. Yeregui was artist-in-residence at the HyperMedia Studio at the University of California, Los Angeles; the Banff Centre for Arts and Creativity in Alberta, Canada; the Media Centre d’Art i Disseny in Barcelona; and the Stiftung Künstlerdorf Schöppingen in Germany. She has received prestigious awards such as the First Prize at BEEP_Art, Barcelona; First Prize at the Argentine National Salon of Visual Arts, 2005; Third Prize at the Transitio_MX Festival; the MAMBA / Telefónica Foundation award in 2004; and the First Prize from the Argentine Academy of Fine Arts in 2014. Founder and current director of the Master of Technology and Aesthetics of Electronic Arts at the National University de Tres de Febrero in Buenos Aires, Yeregui holds a BA in art history from the University of Buenos Aires, a Master’s degree in literature from the National University of the Ivory Coast, and a PhD in media and communication from the European Graduate School.