Why have we not been talking more about ‘artistic research’ in relation to the MA (or the MFA) and, in particular, engagements with practices of research that are meaningful and rich but not sufficiently captured by standard definitions of the term? Why is ‘artistic research’ often conflated with the question of doctoral education in the artistic field disconnecting the vast majority of artists in education from the question of knowledge? How does ‘artistic research’ matter to artists leaving the MA without embarking on a PhD? How does their work matter to us? Having been invited to engage with MA students at various art schools across Europe this year, I want to add a few suggestions to the different debates that I was happy to witness.

Historically, it seems, there were good reasons to focus on third-cycle education, since the right to award doctoral degrees was in many places not a given for art schools and conservatories; ‘artistic research’ had to be clarified and defined not so much for artists, but for a non-artistic academic community. Depending on how academic relationships were settled in a specific national context, different institutional constructs were chosen to accommodate artistic research. While in some places, art schools and conservatories gained university status and PhD awarding powers, others entered local, regional or in some cases international alliances to this end. Yet, in some contexts, we have also seen the development of research master degrees indicating that the concerns around artistic research need, as a topic, not automatically be owned by third cycle education. However, while some of these master degrees might be looked at as ‘PhD-lite’ degrees that conceptually, structurally and also in terms of resource allocation follow doctoral models, others have developed strong profiles of their own in particular in places where they need not rival existing third-cycle education. This is, for instance, the case in some countries in Europe as well as in the US, where the Master of Fine Arts has long been considered the ‘terminal degree.’ There have also been an increasing number of research interested, alternative art schools that from the get-go have refused to enter the economic models associated with the striation into cycles. It is clear that the institutional situation of artistic research is quite complex and potentially confusing not only to a newcomer to the field but to anybody active within it.

In difference to institutional developments in academia, JAR had the luxury to avoid many of these issues focusing instead on peer-review processes as well as rich-media and non-linear online publishing of artistic research, regardless of the academic status of a research project or the artists involved. While we cannot be blind to the effects that the respective rules and regulations have on the research and its articulation in a submission to JAR, we have also witnessed how peer-review worked to counteract some of these effects; peer-reviewers have, by and large, been less concerned with the orthodoxies of research and its definition and more with critical and creative powers of a submission, regardless of the academic position an author may be in. Still, experience and the breadth of knowledge matters despite the fact that it is not always as important as some people make it out to be. It may well be that research carried out by early career artists is more urgent and relevant when compared with that of more experienced researchers. Why not?

This question goes to the heart of a development that we have been witnessing for a few years now: ‘artistic research’ isn’t only relevant for those degrees that bear that notion in their title or are associated with third cycle education, but it is part of a much wider transformation of art education, in particular on a masters level. Those developments are perhaps more important than debates about doctorates in the arts, because as first and second cycle education by far outnumbers third cycle education, its effect on art and professional artistic research will be much greater. It would be valuable to hear more about how teachers in MA degrees reflect on their own experiences with doctoral education in their teaching and to work out what is deemed most valuable for young artists. From my own perspective, I would perhaps suggest at least these three aspects to look at in more detail.

The first has to do with expectations towards writing in MA education. Regardless of whether one associates research with such writing or not, there seems to be increasing discomfort with a model that operates with a separation between creative and reflective practices. While forms of writing may be fundamentally objected to by some, many others would perhaps question more the institutional simplicity that seems outdated in the face of the complexities of contemporary practice. Practices of research matter to this on various levels: questions of originality, understandings of contexts as well as choices of form. While the pressure to associate any of these with ‘research’ may be lower when compared to doctoral education, the questions that practitioners ask themselves are highly related.

Secondly, one may look at the changing role of artistic disciplinarity in MA education where disciplines have increasingly moved from offering artistic identity to becoming resources for practice and where the relationship between both is continually renegotiated. While aspects of transdisciplinarity, that are often voiced between artistic and non-artistic, as well as academic and non-academic research, are relevant here, more important may be what could be called ‘intra-artistic transdisciplinarity’ if such a quasi-oxymoron was permitted. Such an approach would focus on the effects of transdisciplinary practice at the site of disciplinary education, that is, an inward rather than outward perspective that allows us to trace transdisciplinary effects much more closely. In particular, we could focus much more on seemingly traditional art work that is increasingly sensitive to the multiple histories that usually go by this name. My sense is that changes of artistic form on this level have not sufficiently been connected with notions of research to raise questions of the integrity as well as historical agency of professional practice.

This leads me to a third aspect, which has to do with purpose: it seems that relevant ‘art worlds’ have multiplied and extended in scope over the years together with the often-contradictory forms and practices they accept as art within it. While the production of art objects and commodities (i.e. success on the primary art market) still matters, there is so much more artists can do these days that a ‘final show’ cannot capture, including artists’ activism as knowledge workers outside what has been termed the ‘knowledge economy.’ Rather than looking at products, there has been a developing tendency to look at a set of distributed, connected activities within and outside of art and the economic basis that this provides for the vast majority of graduates. Rather than leaving the question of profession until after the degree in a hope for ‘discovery,’ young artists have become smarter in the way that they have integrated that question from the outset. This includes active interests in the development of art pedagogies between students and teachers as a vital, practical element for any notion of art.

This list may quite likely be extended, some details questioned or revised. However, what’s important to me in the context of MA education is the fact that effects of research may often not go by this name. While MA students may choose to expose their practice as research, they may also have different concerns. Focusing too much on notions of research at unsuitable stages may hence have detrimental effects, such as when ‘research questions’ are being imposed, at the same time as  – and this is important – what is happening in the field (including what we publish in JAR) may matter deeply.

There are also consequences for the wider discussion about ‘artistic research’ of a focus on MAs allowing us to perhaps ease the pressure a bit that comes with this label. From the perspective of artistic research, it seems important to start having a debate about the role MA education can play in the development of the field. My sense is that it is here where fundamental changes really happen. Oddly, this may lead much less to a debate across disciplines at a large university than one within an art school or art department, including the way different ‘cycles,’ and the identities they stand for, interact in the studio.  Ultimately, there is always the risk that third cycle education as well as a project like JAR are misunderstood as defending notions of research, while, really, all that matters are the aesthetico-epistemic engagements of creative practitioners, regardless of their status. 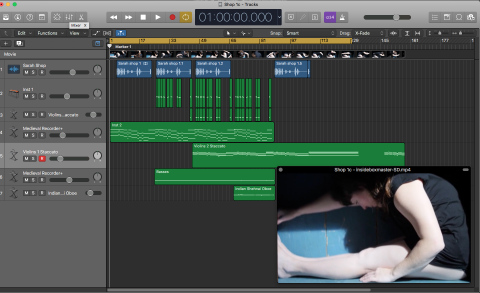 In this exposition, Dr Sarah Black-Frizell and Andy Frizell, discuss the performance installation 31 Days Old (2016). This involved a full-scale installation performance in Sarah and Andy’s family home, in collaboration with Sarah (43) her mother (age 66), her auntie (age 54) and her daughter (age 3). This project highlights domestic photography as a strategic trigger for personal and family narratives and memory work. The work consists of film, live performance and original music and soundscapes. 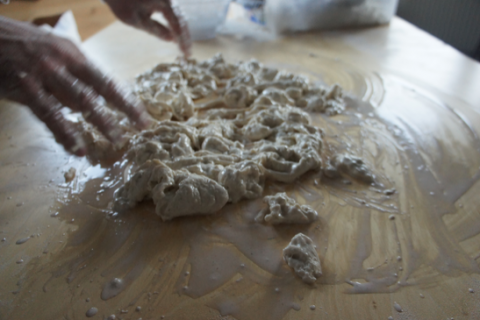 Exploring and Prototyping the Aesthetics of Felt Time

The intention of this research is to investigate how interaction designers may explore felt time through the culinary practice of sourdough baking. In this exposition we share how the physical experience and manipulation/shaping of time in sourdough baking provides an experience of fulfillment and satisfaction. We show our insights on how interaction designers, and possibly many other communities of practice and discourse, may learn from this. 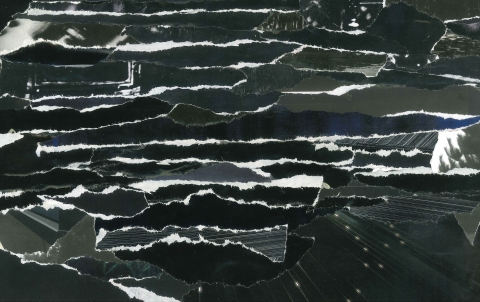 When migraine arrives, not only the body suffers. The voice too is impacted by a condition that introduces itself with such great force. As a migraine-suffering singer I notice these changes and become fascinated by the aesthetics of a failing voice in a failing body. This exposition reflects upon the relevancy of Migraine Music as an aesthetic phenomenon and by focusing on the specific area of the vocal and the sonant, I project the issue into a broader context of language, speech and communication. First, I find the migraineur’s voice to be missing as it is silenced by society. 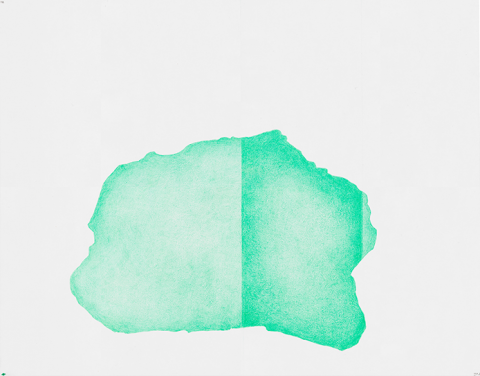 Methods of Indirection: a trialogue between Patrizia Bach, Howard Eiland, and Luis Berríos-Negrón about Walter Benjamin and translating The Arcades Project

Walter Benjamin deemed his Arcades Project [Das Passagen-Werk (Mit Bindestrich und Werk mit Capital W)] “the theatre of all my struggles and all my ideas.” As a vast accumulation of materials, it had become for him a literary laboratory for testing social, critical, and spatial ideas. The co-authors here present an exposition where they look to reactivate that ‘theatre’ to search, test, and draw from each other alternative recursions for their respective practices. Through collaborative media arts practice we explore texture morphing soft robotics as an artistic medium of expression. We present an installation, Homo Viridis, that features a soft robotic interface developed to mediate signals between a vascular plant and a human body. The exposition paper discusses how Homo Viridis stages a situation of hybridity where individual, more-than-human subjectivities are mentally and physically intertwined.